HKScan’s pork that comes from pigs that are bred without antibiotics and fed on locally sourced grain, rapeseed and Finnish legumes has won a prestigious international innovation competition. The prize was awarded in Brussels on Wednesday 29 November 2017. The competition was organised by the joint organisation Copa Cogeca (the Committee of Professional Agricultural Organisations and the General Confederation of Agricultural Cooperatives). HKScan participated with its largest owner, LSO Osuuskunta.

The innovation prize was won by “Omega-3 Pork, No Antibiotics Ever” pork meat, which is based on HKScan’s Rypsiporsas® meat, introduced in Finland in 2011. In Sweden, the concept – Svensk Rapsgris® – was launched in 2012.

“With the Rypsiporsas® concept, the pigs are fed on a diet that includes unsaturated fat from Finnish rapeseed. This ensures that the fat composition of the meat becomes softer and contains more omega-3 fatty acids than regular pork. As a result, the meat is tastier, as well as juicier and more tender. This also makes it a better choice in terms of dietary fat. The concept has now been further developed so that the pigs are raised without antibiotics throughout their lives”, says Pia Nybäck, HKScan’s EVP, Animal Sourcing and Primary Production.

The product has been developed to meet consumers’ expectations for healthier and tastier pork. The new concept has proven to be highly competitive on the export market. The product is currently being exported to three countries. 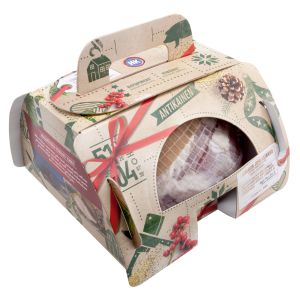 The first batch of “Omega-3 Pork, No Antibiotics Ever”, was exported to demanding Asian markets last summer. It is marketed there as the world’s best pork . This Christmas, HKScan will bring a small batch of HK Farmarin kinkku -Christmas hams of the same meat to the Finnish market.

HKScan’s “Omega-3 Pork, No Antibiotics Ever” is reared on Taru and Matti Antikainen’s farm in Aura, southwest Finland. The pigs are taken good care of in the farm. Because the pigs are healthy and contented they don’t need to be given antibiotics during their lifetime.

HKScan has ensured that the production method is trustworthy and that no antibiotics are used through an external auditing. The audit was carried out by Det Norske Veritas.

Cooperation with the entire Farm to Fork chain

“LSO Osuuskunta and HKScan have together developed this genuinely innovative product in our members’ farms. We are delighted to have won this award. It’s great that an internationally significant innovation that meets health and responsibility criteria is being recognised in this way”, says LSO Osuuskunta’s Managing Director, Veikko Kemppi. Kemppi and Ulf Jahnsson, HKScan’s Director of Producer Services, received the award in Brussels on Wednesday.

The same concept received an honourable mention earlier this year in an export competition organised by the supermarket chain Lidl: http://www.hkscan.com/portal/suomi/hkscan/tiedotearkisto/?id=2265

HKScan is a leading Nordic food manufacturer. We sell, market and produce high-quality, responsibly produced pork, beef, poultry and lamb products, processed meats and convenience foods under strong brand names. Our customers are the retail, food service, industrial and export sectors, and our home markets comprise Finland, Sweden, Denmark and the Baltic countries. We export to almost 50 countries. In 2016, HKScan had net sales of almost EUR 1.9 billion, and had approximately 7 300 employees.