HKScan is about to launch the sale of premium-category 100% Finnish pork products to Chinese consumers. These new branded products clearly differentiate from what is currently available on the local market, offering HKScan an entirely new, significant opportunity to commercialize Finnish food chain expertise in the export arena.

On 26 February 2018, HKScan signed an agreement to establish a joint venture in China with Zhejiang Qinglian Food Co. Ltd. The agreement was signed in Haiyan, a town near Shanghai where Qinglian Food is headquartered. 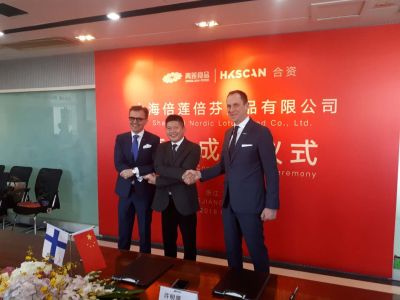 HKScan plans to establish a new footprint on the Chinese market with premium-category, value-added products such as sirloin and tenderloin, products the company has previously offered largely only in the Nordic region. HKScan is the first Finnish company to establish a presence in premium market niche in China.

HKScan and Qinglian Food’s joint venture will commercialize, sell and market products on the Chinese market. The offering will consist of tender and tasty Rypsiporsas® (Omega-3 Pork) products, which are rich in omega-3 fatty acids.

“This joint venture opens up a completely new, one-of-a-kind market for Finnish pork. By commercializing and offering products in the premium category, we are taking the world-class expertise of Finnish pork producers to a whole new level of added value. This creates new revenue opportunities throughout our entire production chain and builds confidence in the international competitiveness of Finnish food production. Competition is fierce all around the world, and China is no exception – only the most competitive products make the cut. Our key competitive advantage is our diligent control of the entire value chain from farm to fork, which has convinced our Chinese partners of our reliability,” says Jari Latvanen, CEO of HKScan.

Exports are scheduled to commence during the first half of the year 2018. The launch of exports to China marks a significant new inroad both for HKScan and Finnish primary production. HKScan’s targeted sales volume in China is roughly three million kilograms of pork within the first year, with plans to triple that volume by 2020. Relative to current pork production volumes, this would mean that at least five per cent of Finnish-grown pigs would end up on Chinese dining tables through HKScan’s export chain.

Finland’s responsible agricultural practices are strategically aligned with HKScan’s commercial aims. Finland is among the world leaders in animal health and welfare, which creates a unique competitive edge and enables the company to continue developing the type of premium-grade value-added products described above.

Founded in 2001, Qinglian Food has been highly successful at building well-known, high-quality pork meat brands in China. Like HKScan, the company controls the entire value chain from primary production to processing, sales and marketing.

“We were looking for a partner whose corporate values and business logic are well-aligned with HKScan’s values and strategic aims. Qinglian Food embraces the principles of responsibility and transparency throughout the food chain, which is fully in line with the core of our From Farm to Fork strategy. Qinglian Food has an impressive track record of successfully developing new brands and concepts, which was a key condition for our collaboration. In addition, Qinglian Food’s in-depth knowledge of the Chinese market offers significant potential for the future advancement of HKScan’s exports,” says Latvanen.

At the end of last year HKScan announced that it had gained approval from the Chinese food authorities to launch exports from Finland to China, marking a significant milestone in the execution of the company’s strategy. The launch of exports has been strongly supported by Chinese and Finnish authorities, decision makers and cooperation parties. HKScan expresses its gratitude to all involved parties both in China and Finland.

HKScan is the leading Nordic food company. We sell, market and produce high-quality, responsibly-produced pork, beef, poultry and lamb products, processed meats and convenience foods under strong brand names. Our customers are the retail, food service, industrial and export sectors, and our home markets comprise Finland, Sweden, Denmark and the Baltics. We export to close to 50 countries. In 2017, HKScan had net sales of EUR 1.8 billion and some 7 300 employees.