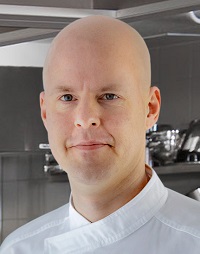 For some reason or another, British cuisine has not had the best of reputations worldwide. However, if we think of bacon and eggs, fish and chips, or the good old Sunday roast, I really can’t fault them. In addition to these, Beef Wellington is one of this island nation’s best-known dishes, and it is indeed a classic meat dish requiring some skill.

The main ingredient for Beef Wellington is beef fillet. Even though you may sometimes see the term Steak Wellington, do not be fooled; this dish is made with a whole fillet. You could prepare pork tenderloin in the same fashion too. The other important ingredients are puff pastry and duxelles, i.e. finely chopped and sautéed mushrooms, onions and herbs – either flavoured with truffle or not. The idea is to quickly brown and season the beef fillet, then wrap it in puff pastry and finish cooking it in the oven. 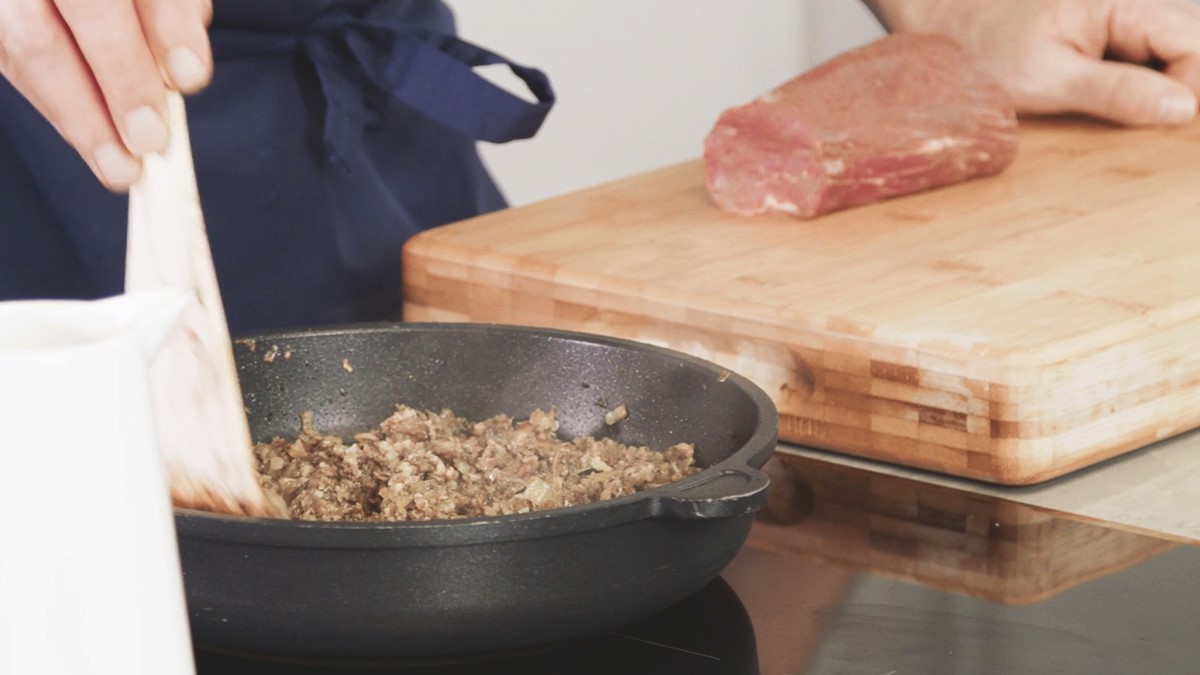 The liquid in the mushrooms has to evaporate off in the pan so that the filling does not become too moist.

The mushroom and onion mixture is placed between the meat and the pastry, and often the inside surface of the pastry shell is also covered in slices of Parma ham or a crêpe before wrapping the meat. This should stop the juices that are released from the meat during cooking from absorbing into the pastry and making it soggy, but often its effect is negligible. Having said that, the Parma ham gives extra flavour to the meat.

The end of the pastry is left without filling so that the seam can be closed up tightly. 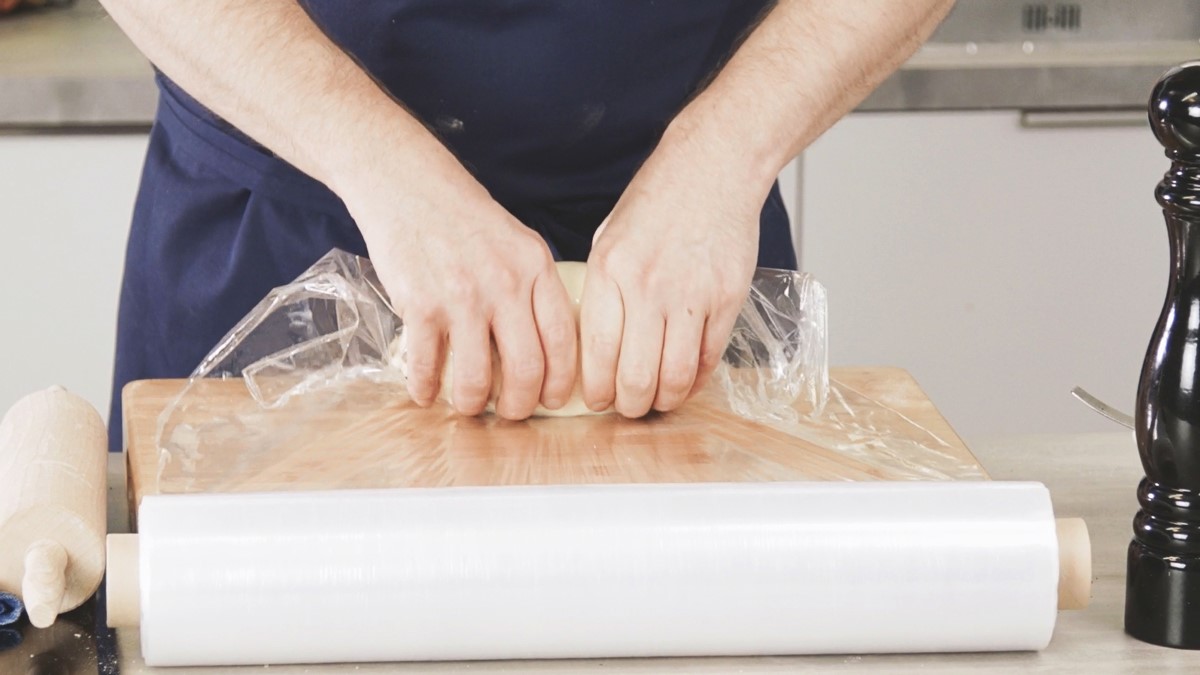 To even out the thickness and to make the whole thing firm, the Beef Wellington is tightly wrapped in clingfilm.

Cooking the pastry crust and the fillet inside it demands some care and attention, and without a meat thermometer, it is easy to mess it up. The pastry shell, which has been brushed with egg yolk, has to be cooked and crispy, but the meat inside should remain pink and juicy. To cook the pastry properly, the oven needs to be sufficiently hot, and a little forethought will prevent the meat from being overcooked. When I would normally take a beef fillet out of the oven when the thermometer shows 56 °C, I take the Wellington out at 52 °C at the most. The hot, buttery pastry shell is a great store of heat and will carry on cooking the meat long after it has been taken out of the oven. For this reason, the fillet’s internal temperature will rise substantially while it is resting, and Beef Wellington needs a long resting time. You can make good use of this time by preparing the accompaniments, for example.

Remember to let the meat rest for long enough before slicing.

This pearl of British cuisine requires precision and patience, and many a contestant in Gordon Ramsay’s Hell’s Kitchen has come to hear this loud and clear from the man himself. In spite of this, I encourage you to take up the challenge to show yourself what you are capable of! 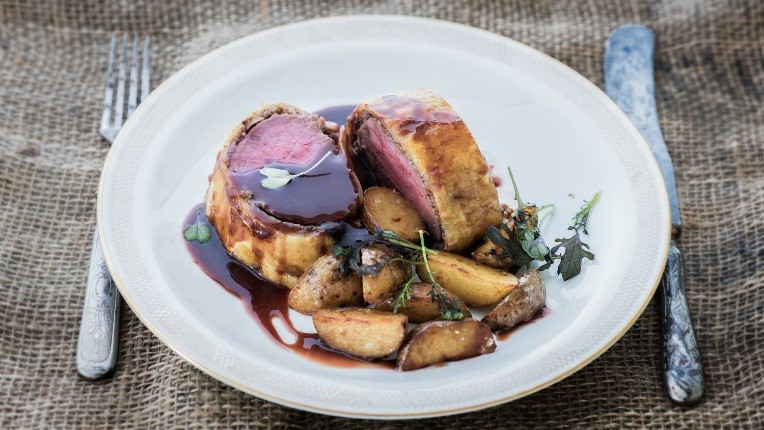 Take the puff pastry sheets out of the freezer to thaw. Use a knife to finely chop the mushrooms, bacon and garlic cloves. Put the mixture in a frying pan with salt and pepper. Mix until the liquid from the mushrooms has evaporated completely. Pour the white wine into the pan and let it evaporate. Add the thyme and then set the mixture to cool.

Brown the fillet in a frying pan with a little oil. Put two puff pastry sheets on top of each other and roll into about a one centimetre thick sheet. The pastry sheet should be wider than the fillet. Place the sheet on the clingfilm, but do not cut the film so that you can roll the film into a tight tube. Spread the cooled mushroom mixture equally onto both sheets, but leave the edges free. Place the fillet on the pastry sheets and wrap tightly. Let it stand in the refrigerator for at least 30 minutes before baking.

Heat the oven to 180 °C. Remove the film from the tube and place it on a baking tray. Coat the surface of the pastry in egg yolk. Insert the meat thermometer into the centre of the fillet from the end of the roll. Place in the oven and cook for about 30 minutes, until the thermometer shows 52 °C. Lift the tray out of the oven and let the meat rest for 15 minutes on a table; the internal temperature will continue to rise another 5–8 degrees during this time. Slice the meat and serve with a red wine sauce and roast potatoes, for example.